Chelsie the Golden Retriever’s motherly instincts kick in and she’s ready to rescue a puppy crying on the computer.

If you’ve ever had a dog who barked at the TV or tried to catch a bird on your computer screen, you might wonder if they understand what they’re seeing. Unfortunately, there’s no easy answer to this question. While dogs are certainly intelligent creatures, it’s unclear whether they are able to understand the complex images on a computer screen. Some experts believe that dogs may be able to distinguish between different shapes and colors on a screen, but they are unlikely to understand the content of what they are seeing. Others believe that dogs may be able to sense the movement of on-screen objects, but they are not consciously aware of what they are observing. Ultimately, further research is needed to determine whether dogs truly understand computer screens. In the meantime, you can enjoy watching your dog’s reactions to your favorite movies and TV shows – even if you’re not sure if they’re truly comprehending what’s going on.

Anyone who has ever owned a dog knows that they are capable of understanding a surprising amount of verbal commands. From “sit” and “stay” to more complex tricks, dogs have demonstrated an ability to interpret the meaning of human language. But what about other types of communication? Can dogs understand computer sounds?

Recent studies have shown that dogs are actually quite good at distinguishing between different types of computer-generated sounds. In one experiment, dogs were played a series of tones, some of which were identical and some of which were slightly different. The dogs were then able to correctly identify the different tones more than 80% of the time. This suggests that they are able to process information in a similar way to humans.

So, while your dog might not be able to help you with your next big project, they may be more intelligent than you think! Bait Dog Discovers Love And Happiness For The First Time Poppy was found during a drug bust. After many surgeries, training, and lots of love he is a happy dog living a life of luxury. ... Read more This Super Jealous Dog Won’t Let His Owners Cuddle Without Him Benny just can’t believe his owners were cuddling without him, but once he got his spot in the middle, he was very happy. Featured Video ... Read more Cat Is Totally In Love With New Puppy Best Friend Teddy the Bengal cross is enamored with Albi the King Charles Spaniel puppy and is constantly grooming and caring for the cute puppy. Featured Video ... Read more Time-Lapse Of Couple Sharing Bed With Pug Karl and Chelsey like to sleep with their Pug, Pablo. They say he makes “comforting and soothing” noises throughout the night. You can see how ... Read more Hard-Working Sheep Dog Knows How To Get The Job Done Check out how this dog runs along the top of the sheep in order to herd them. Such a smart and hard-working pup! I love ... Read more 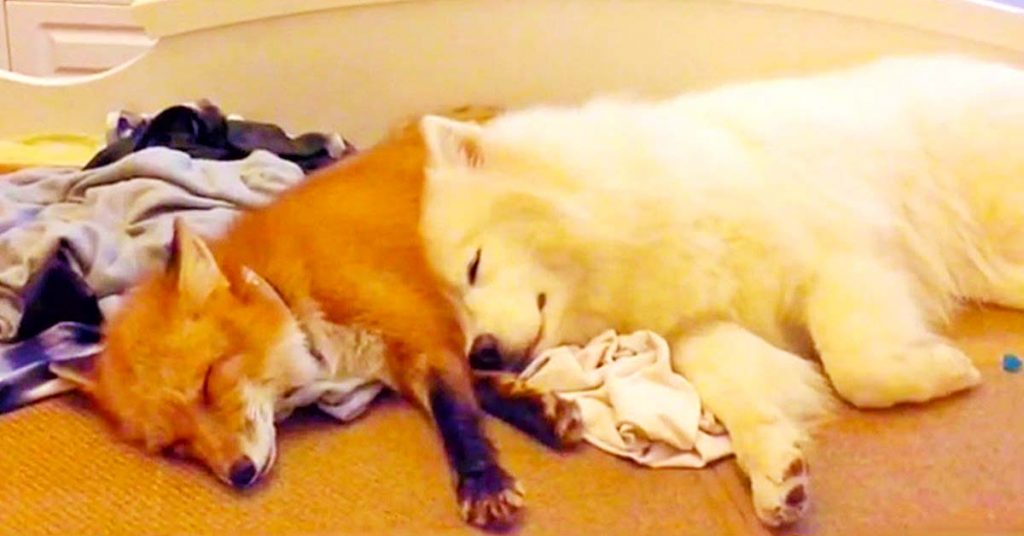 Fluffy Dog And Rescued Fox Are Best Friends These pals do everything together. They cuddle for naps, play with each other, and keep their mom entertained. https://www.youtube.com/watch?v=1PbWl079LJk Featured Video This dog loves to ... Read more Dog’s Snoring Works As A “Lullaby” To Help Baby Fall Asleep This Mastiff and baby snuggling together for a much needed nap is so adorable. Featured Video Did you know that dogs snore too? And that ... Read more

Here’s What Happens When A Wild Wolf Approaches A Pet Dog Romeo the wolf would return over and over again to play and interact with dogs and people in Alaska. Featured Video Are some wolves friendly? ... Read more