Man cries tears of joy after being surprised with a puppy.

Should you give a puppy as a gift?

Some people may think that giving a puppy as a gift is a good idea, but this is not always the case. For one thing, dogs are living, sensitive creatures with their own unique needs and preferences, and it can be incredibly challenging to provide for them properly if you are not familiar with their needs. A puppy also requires ample time and attention in order to grow and develop into a well-adjusted adult dog, so simply handing one off as a surprise gift won’t do it any favors.

Additionally, there are many emotional considerations around giving a puppy as a surprise gift. While most dogs eventually form strong emotional bonds with their families, most puppies do not come with an established history of being loved or nurtured by humans. Finding new homes for these pups can be difficult for both the animal and its former owner, so it is often best to consider all aspects of bringing home a new pet before making that choice. In short, while some people might feel pressured to give a puppy as a gift, it’s important to remember that this isn’t always the most responsible option or even in the best interests of everyone involved. Instead, when considering adopting or purchasing a pet dog or puppy, it’s important to carefully consider all the factors. Dog Is Completely Jealous Of A New Puppy Addition This is the first time Dempsey met Owen the puppy. The look on his face at the end is priceless! When my owner first brought home little Owen, I could feel my blood start to boil. Not only was this new puppy chewing on all of my favorite toys, but he seemed to be getting […] More Kind Dog Shares His Food With Hungry Stray Cat This sweet dog takes a hamburger bun and lays it down by a homeless cat, and then watches to make sure the cat takes it. How do I get my dog used to a stray cat? If you’ve recently adopted a stray cat, you may be wondering how to introduce her to your resident dog. […] More Dog Stops Car to Help Save Owner Who Suffered a Seizure Clover the Samoyed dog saved her owner’s life. Haley Moore suffered a sudden seizure and was unresponsive on the ground. Surveillance video from across the street catches Clover stopping a car to get help. Clover ran to the middle of the street and the driver stopped to see what was the matter. Then, the driver […] More Huge Dog And Miniature Pony Become Best Friends Four-month-old miniature Shetland foal, Sutton and five-year-old Newfoundland dog, Dom just met and are already smitten. Have you ever seen a dog so big that it could compare to a miniature pony? Well, neither had I until I saw the two of them become best friends. It’s an incredible sight to behold and just goes […] More Dog Watches People Sledding, Proceeds To Do It Herself Layla the dog notices other people going down hill on a sled, so she does the same with her two front paws on her frisbee. Do dogs like snow sports? When it comes to snow sports, dogs typically fall into one of two camps: those who love the cold weather and those who would rather […] More Retired Military Couple Find Their Soulmates With Puppies No One Wanted Noah and Lincoln and their humans provide so many laughs. Watch this hilarious family in action. Noah was a runt that the breeder was going to discard, but this military couple adopted him and quickly fell in love. They later adopted Lincoln when his family couldn’t handle him because he was too energetic. Now they […] More Man Goes To Pier To Scatter His Grandmother’s Ashes & Ends Up Saving A Drowning Dog 20-year-old Raden went to a pier in Melbourne, Australia and a strong wind blew a tiny Maltese-Shitzu mix named Bibi off the pier and into the water. Her owner panicked but Raden reacted quickly to save the dog. How to save a drowning dog? If you see a dog drowning and you are unable to […] More Puppy Surprise Delivered In Style Of ‘Love Actually’ Movie Scene This family surprised their sister with a puppy she’s been wanting for a very long time. There is nothing quite as adorable as a puppy, and everyone knows it. Whether peeking out from beneath a blanket or snuggling up in your lap, these furry little bundles of joy always bring a smile to our faces. […] More Adorable Golden Retriever Puppy Overcomes Fear Of Stairs 14-week-old puppy, Ace, is so cute to watch as he tries to understand the stairs.   Today's Featured Video As if Ace the 14-week-old puppy wasn’t adorable enough, watching him try to figure out the stairs is absolutely captivating. He slides one step at a time, carefully placing each paw in the correct spot, and […] More 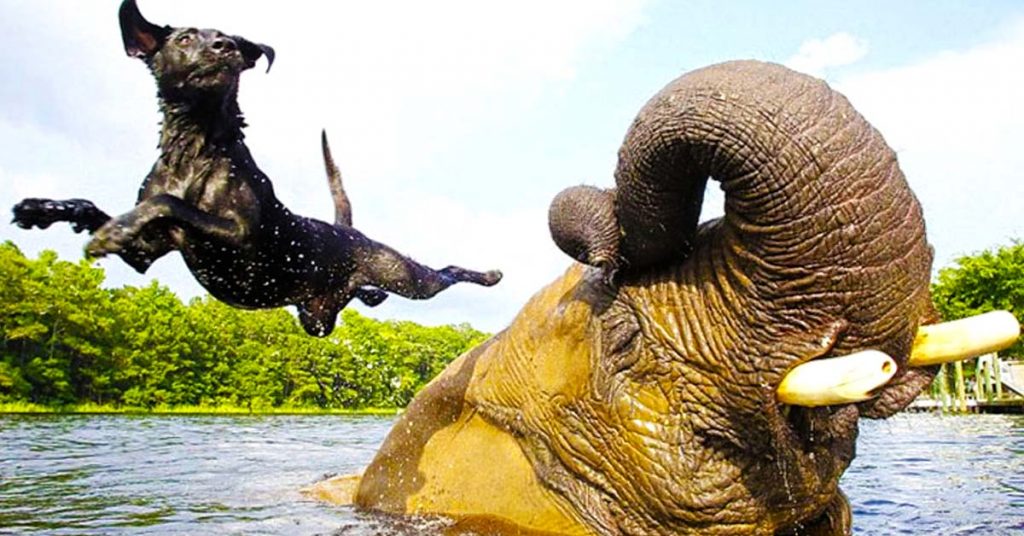 Adorable Dog And Elephant Friends Love Playing In The Water Bubbles the African elephant and Bella the black Labrador love to play in the water together. This is one of the most adorable animal friendships that we’ve seen in a long time. They’re both residents at the Myrtle Beach Safari in South Carolina and have become the best of friends. A contractor was hired to […] More
FacebookEmailPinterest