While it may not always be obvious, dogs are actually quite skilled dancers. If you’ve ever seen two dogs playing together, you may have noticed that they often take turns leading and following each other. This is similar to the way humans dance with one another. Dogs also use their bodies to communicate with each other through movement. For example, when a dog stands up on its hind legs and waves its front paws in the air, it is usually asking to play. Similarly, when a dog wags its tail from side to side, it is usually a sign of happiness or excitement. In other words, dogs are able to express themselves through dance just like humans do. So next time you see your dog moving around to the beat, don’t be surprised – they’re just busting a move!

Even though dogs can’t physically talk, that doesn’t mean they can’t communicate. Dogs use their bodies to express themselves, and one of the ways they do this is through dance. When a dog is happy, excited, or wants to play, they may start to jump up and down or spin in circles. This type of physical movement is often referred to as “dancing.” While it may not look the same as human dancing, it’s still a form of communication that allows dogs to express themselves. So the next time you see your dog getting their groove on, remember that they’re just trying to tell you how they feel. Guy Comes Home To His Husky On The Roof William Tyler was shocked to find his Husky waiting for him on the roof when he returned from getting takeout. William later discovered that his ... Read more 200 Pound Mastiff Serves As Therapy Dog At Elementary School Gabe is a massive dog, but he is so gentle and loving to the kids at this Virginia elementary school. Featured Video Are english mastiffs ... Read more 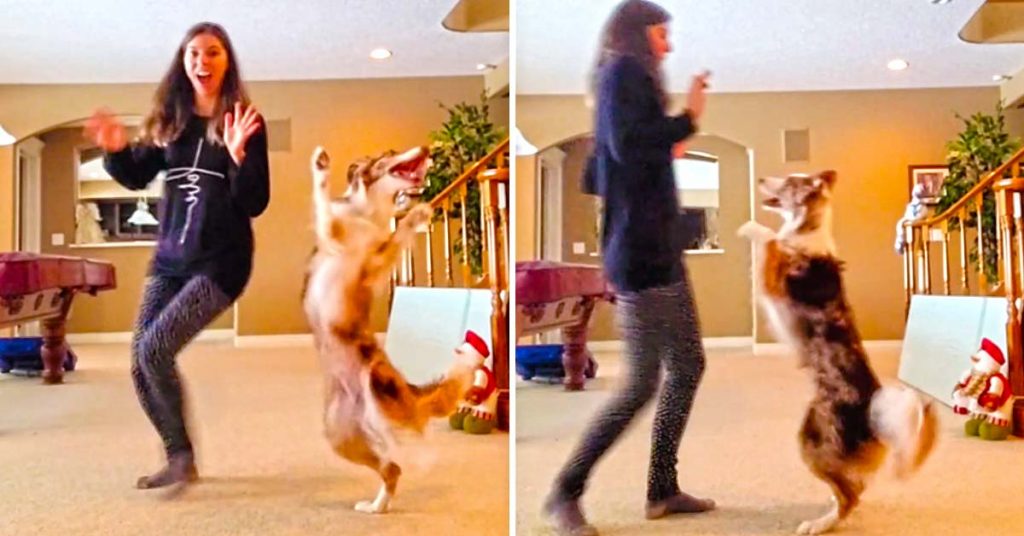 Dancing Dog Has The Best Time Busting A Move With Her Owner Meet the dancing duo Katerina and her dog Lava! They have so much fun dancing together, and Lava has the biggest smiles. Featured Video Dancing ... Read more Dog Relaxes Adorably In A Baby Swing This adorable little dog is taking advantage of having a baby in the house. This swing is so relaxing. Featured Video Move over, babies. There’s ... Read more Lonely Husky Picks Out A Kitten Friend To Take Home From The Shelter Raven the Tamaskan Husky picks out Woodhouse the cute tabby and they become best friends. Featured Video How to know if a dog and cat ... Read more Happy Bichon Frise Dog Can’t Stop Smiling Buddy the six-year-old Bichon Frise is such a happy dog that if you throw him a grin and two thumbs up, he’ll send a smiley ... Read more Little Girl Lies On Her Dream Bed Of Giant Puppies Sierra is living her dream life snuggled with her giant Newfoundland dogs. Featured Video She has a very special bond with her dogs and they ... Read more Dog Tries To Hide To Avoid Leaving The Park Poppy was hiding in the tall grass, but she can’t help but to pop her head up when her name is called. Featured Video Is ... Read more

Guy Comes Home To His Husky On The Roof William Tyler was shocked to find his Husky waiting for him on the roof when he returned from getting takeout. William later discovered that his ... Read more