How did I end up with all of these puppies? I mean, where did they come from?

Oh, wait, they’re mine. Well then, I guess it’s time to play and learn about some fun puppy facts!

There are a few things that all dogs know that we need to teach the humans about, so I guess it’s time to start learning!

Did you know that puppies are blind and deaf at birth? I know! It’s wild. I’ll explain why we think that is…

So, before a lot of us dogs became house pets, we were left to roam the countryside for our food. This made hunting extremely important so that we could eat.

Pregnant dogs obviously can’t hunt very well, so our pregnancies don’t last as long. This leaves our pups entering the world blind and deaf because they aren’t fully developed due to short gestation periods, while we are able to get back to hunting to help stave off starvation.

It’s funny how that works, huh?

Oops… we got a lagger there. Maybe he’s getting bored of playtime? I guess I will tell you another fun fact about us dogs.

Do you know how people say that yawning is contagious? Well, that’s actually an empathy trait. It begins with children at around four years old, which is the time they start to develop empathy.

Dogs mimic this very closely because we start copycat yawning at around 7 months. Since our dog years are a bit faster than human years, this actually matches up really closely with the human’s copycat yawn! How cool!

These guys sure have a lot of energy! When is a mom supposed to be able to catch a nap around here? My goodness!

Anyway, let’s talk baby talk. Did you know that grown dogs don’t really care for it? Our puppies do, though!

In fact, a human did a study and played a recording of women using baby talk for 10 adult dogs and 10 puppies.

Can you guess who ran toward the recording?

You probably got it right! It was the 10 puppies! The grown dogs stayed behind because we just don’t care for baby talk as much as our pups do. 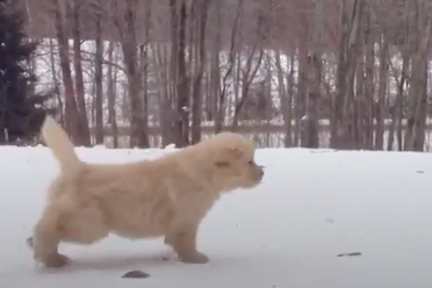 This little guy is the runt of the litter, but he is one of my favorites (don’t tell the other pups!).

In honor of this small puppy, I present you with a small fact.

Did you know that humans have an easier time concentrating after they are shown images of puppies?

Ya, we’re just that cute.