This is your friendly neighborhood canine reporter, Q.T. Rex, here bringing you’re the news everyone has been barking about. Our featured video shows that golden retrievers are loyal, friendly and loving dogs the world over. Let’s start out with this adorable image of Addie protecting her little pup before we break down the backstory. 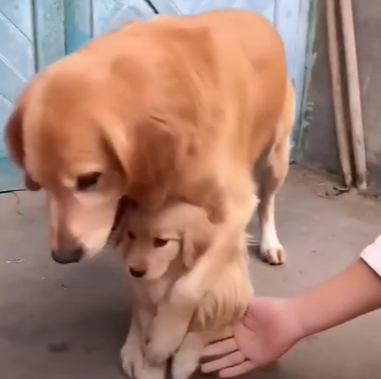 As a dog with a faithful mate and litter at home, I found this video particularly heartwarming. The cute clip was shot on December 7, 2021, in China’s Yantai City, located in Shandong Province. 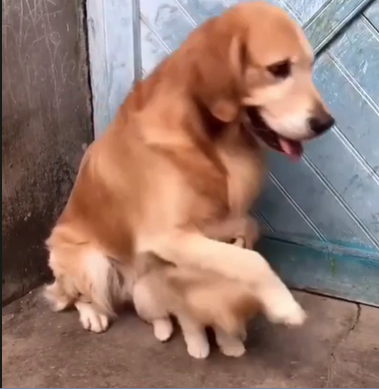 Here, we see four-year-old Addie shielding the puppy’s eyes as the owner scolds the puppy. What a sweet, protective parent and inspiration to pooches everywhere.

An Exceptional Example of a Protective Breed

It’s no wonder this golden retriever is such a great parent. After all, golden retrievers have been bred for loyalty and protectiveness. You can tell that Addie wants to obey her owners but is overcome by love and a motherly instinct to protect her pup. Even so, she gently rebuffs her owner. It’s not easy to walk a fine line like that but, Addie does a fine job of it.

Golden retrievers famously stayed by their owner’s side. even treats cannot tear them away. However, in this case, one adorable pup was all it took to show where this dog’s true loyalties lie.

And, with her steadfast love, she gets four paws up from this reporter. 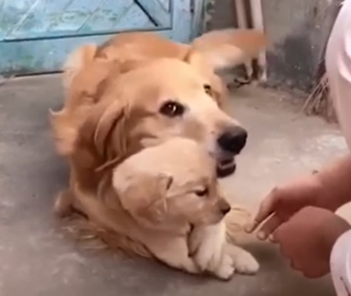 According to the American Kennel Club, golden retrievers have large, intelligent and expressive eyes, and Addie is no exception. Although smothered in love, this pup doesn’t seem to object to his mother’s affection. In this reporter’s mind, this dog has the heart of a lion. 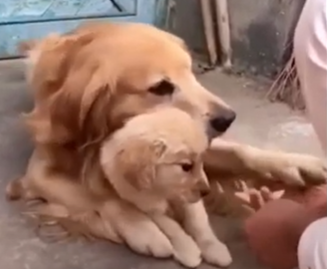 Although Addie seemed to feel that it was too early to teach this young pup new tricks, she eventually reconciled with her human. At least Addie’s mind on the matter is clear. If you want to take this pup for training right now you might as well just talk to the paw!

Here’s what I recommend if you ever find yourself in a similar situation — caught in the middle of protecting your pup and obeying your human. The AKC recommends training puppies between the ages of eight weeks to two years old for best results. Although sources didn’t specify the age of Addie’s pup, we think a few more weeks of concentrated love can’t hurt this youngster one bit.