Let me get one thing straight: when you have had a long day, the first thing you want to do is just relax with some TV! There is nothing worse than not being able to take a load off after a long day of running, playing catch, and burying things in the yard! You’re plain tired, your dogs are barking (no pun intended!) and you just wanna sit! Maybe watch some TV and have a snack before getting dinner. It’s every American pup’s evening routine – so that’s why I get so annoyed when my routine is ruined!

My roommate is… well, he’s a sweet guy and all, but he can really get on my nerves sometimes! He has this terrible habit of not respecting the boundaries we have in place! He gets to chew the old leather boot by the TV stand, I get the squeaky bone. He gets to watch his scary crime shows on Thursdays, and I get to watch my silly sitcoms on Tuesdays. There are rules in place to keep things fair!

And this seat? 100% mine! It’s been a part of my turf for years, and he just comes and plants himself here!

The worst part is that I can’t tell the humans which things are part of my turf and which aren’t. I can communicate pretty easily with the humans on the important stuff, but delicate things like possessions and turf? There’s just no way to get my point across. That means I’m all on my own here with getting my spot back! 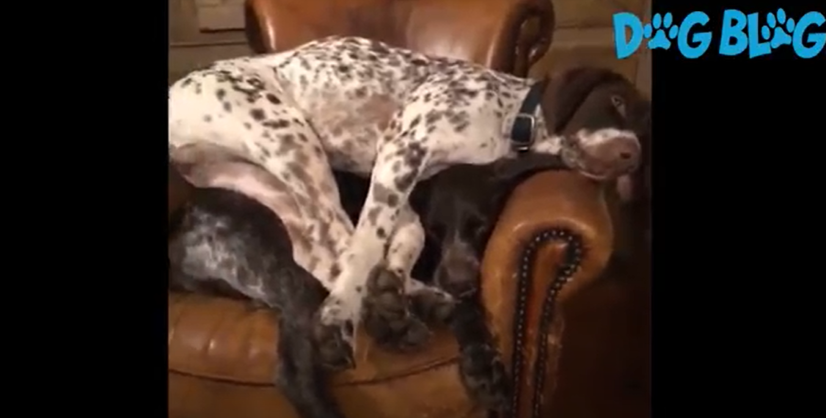 Well! I’ll be sure to give him a lesson he’ll remember! Yep, I’m gonna make sure that this doesn’t happen ever again. He’s not responding to pleas to get down, so I need to bring out the heavy artillery.

That’s right, time to take my seat back by force! Just lay here as if he isn’t even sitting here. That’ll show him! I’ll stay here for as long as I need to, too! I’ll stay here all night, even into tomorrow morning if I had to.

Oh was that my dog bowl? Time to get up and eat!