One day I was sleeping in my dog house, snuggled up in the soft, freshly-cut hay, when my master human came running with a bunch of carrots in his hand. “I have a great idea!” he exclaimed. Whenever he says that we are in for something truly bizarre.

Like the time he dressed me up as a female human, propped me up in the front seat of his car, and drove me around town. He stopped whenever he saw someone to introduce me as his new wife.

I have to admit the looks we got from the people were hilarious. One old-timer even said, “I can’t see too well, but she has nice fine hair, as he ran his fingers through my fur. I gave him a little nip on one finger, just to let him know that he should not be fondling the hair of my master’s wife.

After that prank, it had been a while for my master to think up another funny thing to do. He handed the carrots to me and told me to hold them in my mouth. They were not something I would ever eat. The stems in my mouth tasted like grass. I only eat grass when I want to throw up. I did not want to throw up now, so I had to concentrate not to swallow any.

“Hold them there,” said my master, “hold still,” as he got some photos using his camera on his phone. “Now come on,” he said, “Let’s feed the other animals.”

I was willing to play along when I saw he wanted me to hold the carrots for the rabbits to nibble on. I love rabbits. They are warm and cuddly, and fun to play with. The duck came by to see what was going on and the little pig too. 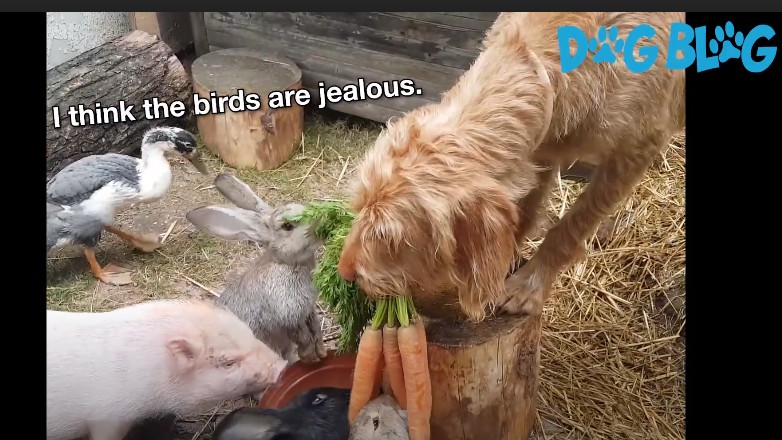 That pig is a real, … well… pig! She wants to eat everything in sight and is rude about grabbing much more than her fair share. I held my own as she pulled and pulled. 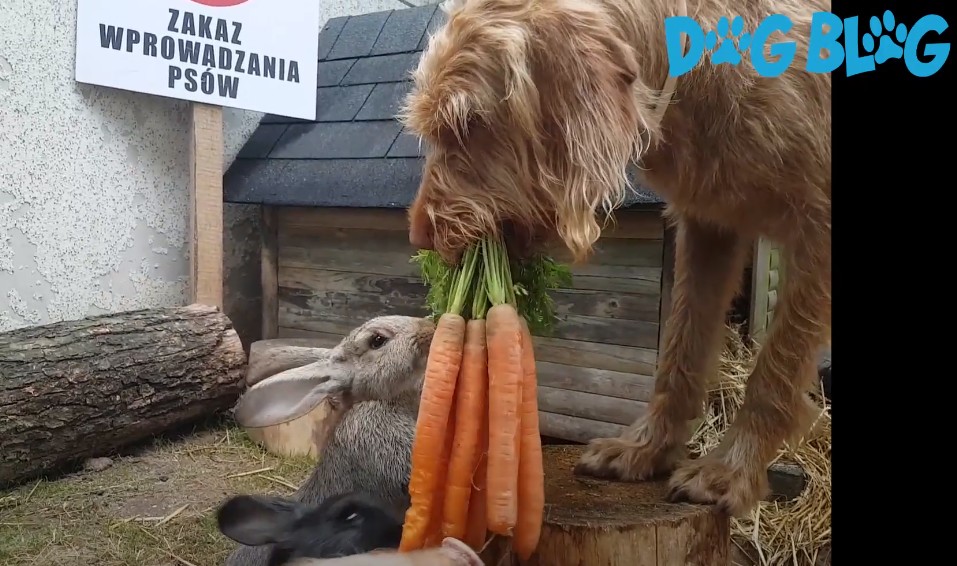 Did you see that sign in the background on the wall? It says “ZAKAZ WPROWADZANIA PSÓW.” It is in the Polish language. In English, it means “Dogs Prohibited.” My human owner has a weird sense of humor. He tells everyone I am not a dog. He says that I am a long-haired sheep, now, a specially-trained rabbit- and pig-feeding sheep, I suppose. He is trying to teach me to say, “Bah, bah,” like a sheep, but the closest I can come to making that sound is “Arf, arf.”

I don’t know what he is thinking. Sheep and dogs do not speak the same language. Dogs control sheep when herding them. To pretend to be one of them is just not natural for me.

At least my master’s new trick was easy to learn and not humiliating, like trying to be a sheep.

In the tug of war with the pig, I won. I held the carrots until the very end when my master gave me the let go command. 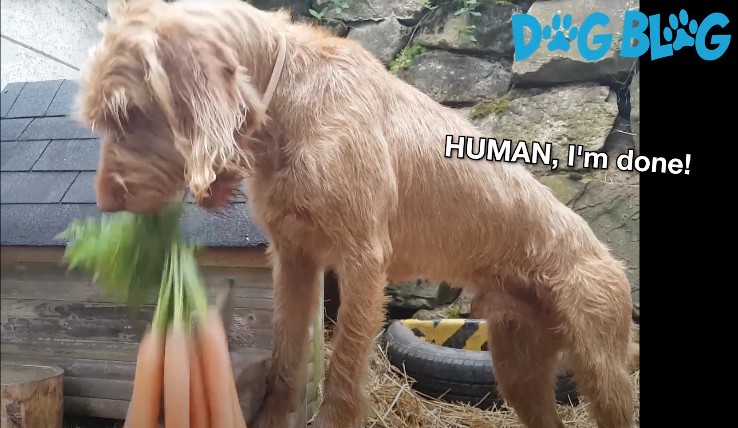 It is always fun on the farm when you have a human master who always comes up with interesting things to do.