Wow, look at all this white stuff! This has to be my FAVORITE time of the year! Everything is covered in this sparkly white stuff, and anytime I get too hot from running around, I can roll around on the ground and boom! I’m all cooled off!

But for humans, I don’t think it’s always so fun for them. My humans always have to bring out these giant spoons and clear out some of this chilly white stuff. Which makes total sense! Sometimes the white stuff piles up sooooo high, they can’t get into the metal dog with wheels for feet. Plus, they don’t like tunnelling into the snow like I do. I don’t know why (it’s tons of fun!!), but I don’t judge! 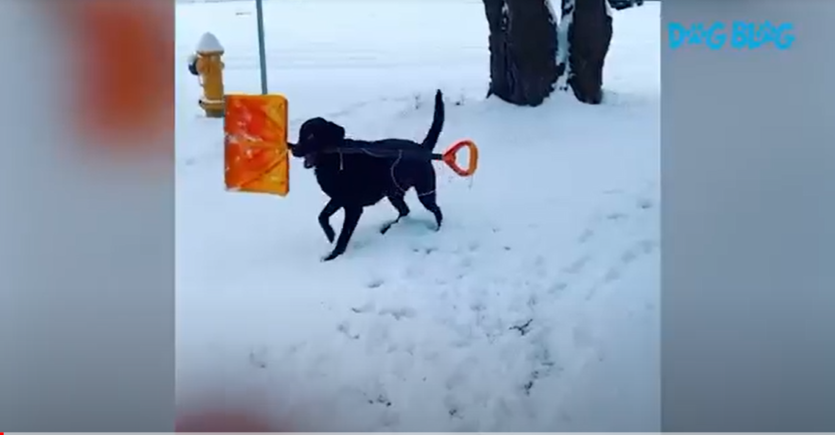 Well, this year I figured I’d give the humans a bit of a helping paw. They’re always so tired when they’re done cleaning up the white stuff, so it seemed only fair that I do what I can!

Problem is, this spoon was made for human paws, not doggie paws. This might be tougher than I thought. But don’t lose confidence in me! I will figure something out!

Let’s see if I can bite this… ah-ha! Got it! Doggie mouths are tough and super useful – we can grip just as hard as a human paw. Now let’s get to work! I’m gonna try and mimic what the humans do. Just you watch!

Spinning should work! I’ve seen the humans do something llike this, except they were flinging white stuff over their shoulder. I wonder why that isn’t happening here? Maybe I need to spin harder.

That should do it! Wait, there’s still some white stuff here?! Ugh, this is so difficult! Okay, spinning is out, time to try jumping. Maybe I can pat the white stuff down! Make it so flat that the humans won’t even know it was there. Here I go!

This is hard work, too! No wonder the humans always come in looking like they’ve dug up a hundred bones! And I still haven’t moved a single flake! How the heck are you supposed to do this?

I’m starting to think maybe I should leave this to the professionals. Let them take care of the white stuff cleanup and I’ll… do more dancing to keep them happy, yeah! Maybe if they see how good I can dance, they won’t feel as tired!