Have you ever just looked at something, a picture, somebody or some animal doing something, like a bear holding a water hose while a dog lies in the grass watching, and think to yourself, ‘that can’t be what it looks like?’ Some things just don’t make sense, like to begin with, why would a bear have a water hose, and why is a dog hanging out with a bear?

Well, my friends, let me start by saying that this is exactly what it looks like, but there is a very reasonable explanation for this scene. It might take a second to tell you, so give me a couple of minutes to help you understand this seemingly unusual but very understandable image…

So, picture it, beautiful sunny day, big green grassy open area – and I’m a dog. Yeah, you get the idea. After finding this lush green playground, and running, jumping, taking care of business, and other dog stuff it was time for some sunbathing. If you didn’t know, we are big sunbathers, but I know this isn’t just a dog thing because I’ve seen all you half-naked humans in the sun!

Okay, so here I am just like any of you might be, just chilling’ out and catching some rays when this bear (yes, that bear) comes strolling along. Actually, I could tell that this was more of an intentional walk, not simply a Sunday afternoon walk in the park. At recognizing this and the hint of some minor concern on this big furry guy’s face, I approached him. 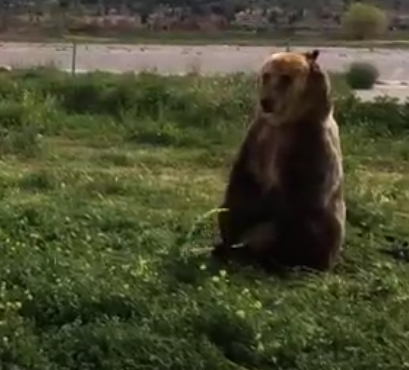 Come to find out – this big fella was lost, and somehow he got away from the zookeepers and couldn’t find his way back! Well, I’m a dog, and we are hard-wired to help. So I told my new bear acquaintance that if he gave me a few more minutes to finish catching some rays, I could help him back. (We dogs are incredible trackers!).

Well, this big goofball found this water hose while he was waiting, and (I should say) in a much better mood now he decided to cool off…

Then, he got a little carried away and decided to play! Bears are infamous for getting bored easily, so I think he had about enough waiting at this point. Needless to say after getting a little water bath of my own, and in truth, it was actually kind of refreshing, we decided it was time to get him home.

Now this image doesn’t seem nearly as bizarre or strange, does it?

Okay, yeah, it does, but that is just another “bearly” believable day in the life of a dog.