Every once in a while, my hoomans bring me home a toy. They’re always fun to toss around, and I’ve never had one fight back (I’m just a really strong pup. My woof might be small but I am a mighty boy so I just assume they’re all too scared to fight me).

But today they brought this thing home. I could tell just by looking at him that we weren’t going to have a good time.

I’ve tried to destroy him a few times and he keeps fighting back! What has happened to my puppy power? He seems to be immune to it… 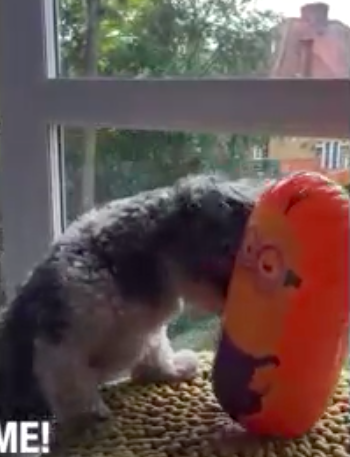 Is this a fellow animal? How else is he able to fight me back? Doesn’t smell like he’s any type of animal I’ve ever met… But every time I use my mighty pup powers on him he just stands right back up. How?

Maybe this is a joke. A dog gag gift? Are those a thing? Because they shouldn’t be.

This punk is on my last nerve! I think it’s about time to have a talk with the hoomans about the types of gifts they’re giving me. I really don’t like this one. It’s almost as bad as the Roomba vacuum they got last year (apparently that one wasn’t a toy, but I still tore it up for them, i wanted to make sure they were safe and I didn’t trust it). 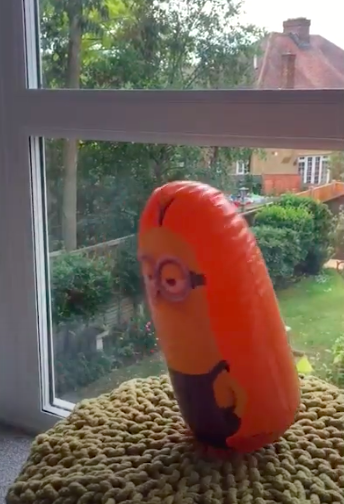 Someone call the cops this thing just bopped me right off my feet! And with no remorse! I’ve never seen a creature so heartless and powerful.

Do you see how he is looking at me? He really thinks he did something there.

I’ve had about enough of this guy, I’m telling my mom. She’s always got my back when I’m being bullied. Although it’s usually by another dog. Not by a toy. 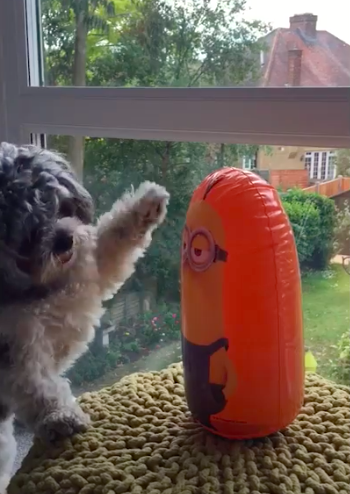 Mom told me to fight back harder, so I guess I’m going to give it a shot. Take that small, yellow creature.

I finally got a leg up on this guy and he’s going down! But my frustration at my hooman’s gift is still growing.

I strongly dislike this little guy and I’d really like for him to leave… Perhaps it’s time to get the cat involved? 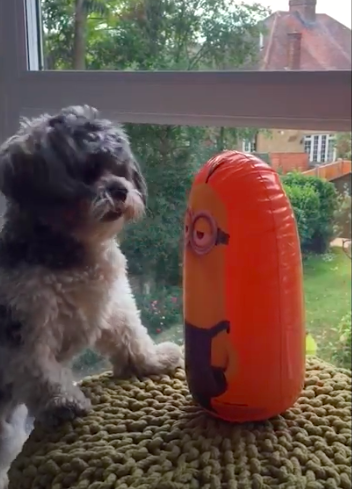 She’s still mad at me for eating her food last week, but I think if I asked nicely and made a good case, she’d help me out. This guy is a threat to her as much as he is to me, after all.

So far my plan is to have her sneak up behind him and then WHAM, smacking him with her pointy paws. She got me with those once and my nose hurt for a week! She may be small, but she can really throw a paw.

Hopefully my hoomans aren’t mad at me for this, but the yellow guy has booped his last bop with me.