If my owners never caught this on video, then nobody would have believed it. Now, as far as I am concerned, I have always had a knack for sports, so it didn’t really surprise me. My owner and his human friends, however, were totally amazed.

Let me recap the event and what all the hype is about. It was a typical sunny and beautiful summer day like many others. As a matter of fact, it was a perfect pool day, and as you can see that is exactly where we ended up. 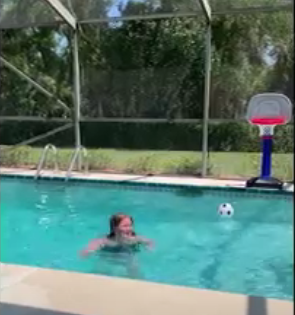 Now, my owner and his people were all splashing around and just cooling off, when someone (I can’t remember who) decided they wanted to play pool basketball. Well, as it just so happened, my owner had in the shed a portable basketball hoop and backboard, along with an inflatable ball.

So there we were, just enjoying the day, and I was actually doing a whole lot of nothing, other than catching some rays and enjoying watching the fam play when it happened. One of the humans said hey, toss the puppy the ball.

Are you sitting down? Well, I”m pretty sure that when they tossed the ball to me that they didn’t foresee or expect me to do what I did. And just so you know, I have always been naturally athletic, even when I was just a wee puppy. 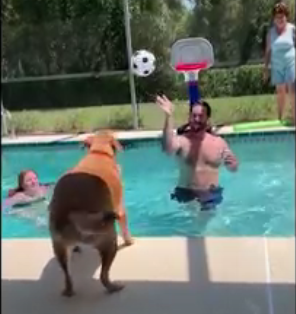 Now when my owner tossed the ball, I could tell that it was a little off, so I made a couple of subtle adjustments probably undetectable to the human eye, right before catching the ball. Because of those adjustments, that also meant that I was already in shooting position.

Oh yes, that’s right, I had every intention of going for two! The portable rim and backboard was set up all the way on the other side of the pool, so I also knew that I was going to have to get some air under the ball. 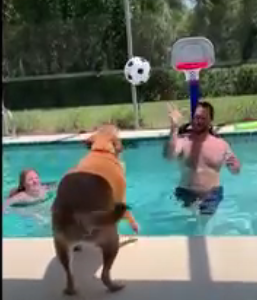 If you look right here in this great still shot of me preparing to catch and shoot the ball almost simultaneously, you’ll notice my pre-shot form. Nice – right? Oh yeah, it’s all about your form, and the results speak for themselves.

And now, for the big moment. I knew it was good once it left my nose, and as the basketball sailed through the air toward the basket, everyone started to see it. Then, just like that, nothing but net!

My owner screamed, his human pals all yelled and threw their hands up – it was amazing. This is my favorite shot in the video, as the ball just gets ready to go in! 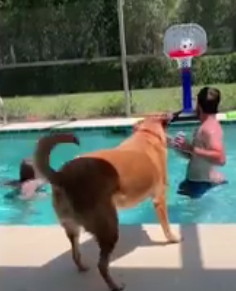 I’m not bragging, but I’ve also just always had a nose for the basket. Not saying I’m the best, but you don’t want to play me in a game of PIG!